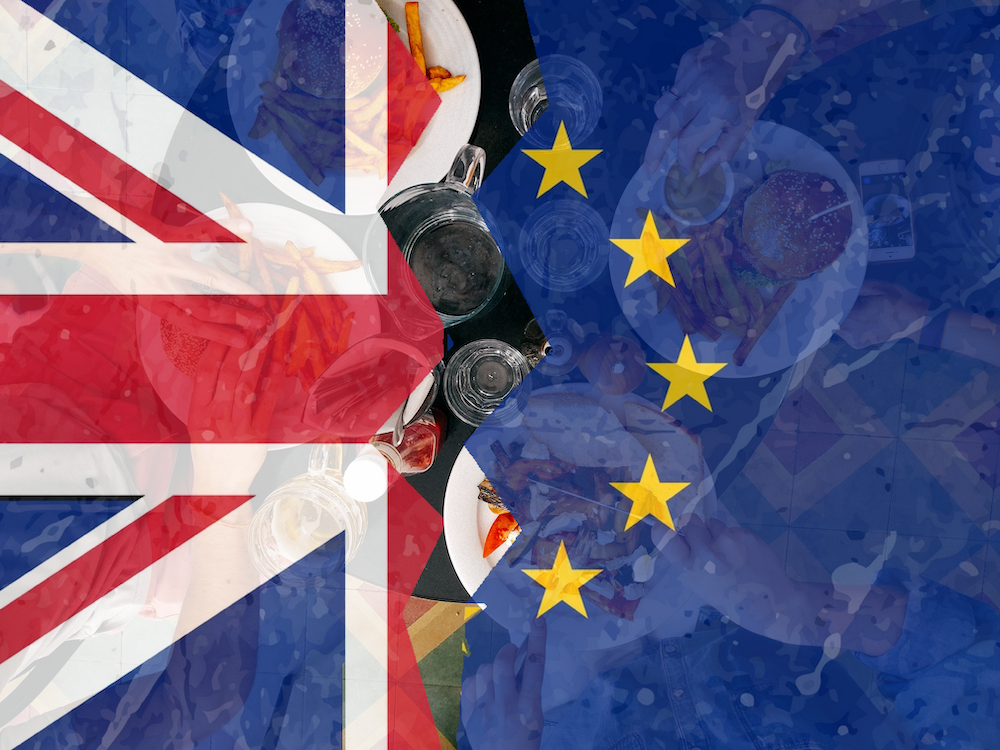 The food and beverage industry has many challenges to contend with in 2019.

Oh, and also, there’s the small matter of BREXIT!

No one quite knows what’s going to happen when D-Day arrives on 29th March 2019 but one thing is for certain, Brexit will have a huge impact on the food and beverage industry . Below are just some possible Brexit consequences.

The biggest fear for many food and beverage companies post-Brexit is that no deal is struck whatsoever. If this is the case the EU’s Common Customs Tariff rates (CCT) could be applied to products.

This could mean that the UK is treated the same as other non-EU countries, whereby they will have to pay higher import tariffs that match. (e.g. 30% tariff on sugars and confectionary, 20% on tobacco and beverages etc).

This is a problem that John Calland, head of external affairs for Tilda discussed with The Guardian. “Leaving the Customs Union means the UK will get third-country status. That could bring with it large tariffs. Products like rice, which are only processed in the UK rather than grown here, will fall foul of exceptionally complex “rules of origin”.

Indeed, in the Food and Drink Federation’s (FDF) Q3 2018 business confidence survey, When looking ahead to 2019, two-thirds of food and beverage businesses that the FDF spoke to identified future tariff implications as a risk to their business.

Brexit could bring with it increased border controls checks too and this could have serious implications for the supply chain.

Brexit consequences could be increased costs, time spent with items with limited shelf life being ‘in situ’, products taking longer to get to market and having less time on the shelf are just a few likely issues.

Richard Burnett of the Road Haulage Association sums up, if there is no deal “checks on non-EU trucks (which is what the UK will be classed as) don’t take a couple of minutes, they can take two or three hours.”

The Guardian writes “Various logistics experts have pointed out that an extra two minutes of checks per truck would result in a 17-mile tailback within a day, for both importers and exporters on both sides of the channel.”.

An advantage of Brexit is the potential for access to new markets for the UK to work with.

Along with the US and China. The BBC recently reported that Theresa May held discussions at the G20 Summit on ‘ambitious economic partnerships with Australia, Chile, Canada and Japan, among others’.

Although any deals can’t be drawn up until after Brexit, this consequence could open up many new expanding markets worldwide to draw up agreements with and sell products in and out of, so that the UK would no longer be limited to dealing just with the EU.

Many companies based in the UK have already started to lose employees to EU countries due to uncertainty. Foreign workers can’t trust that everything will be ‘OK’ post March 2019, they need stability, so they’ve already upped and moved on elsewhere to the EU and beyond.

In a recent interview with The Guardian Ali Capper who runs Stocks Farm, a fruit and hops producer in Worcestershire states “(post-Brexit) the biggest crisis is where the people are going to come from to grow, pick and pack.”

As the newspaper pointed out. “Forty percent of migrant labour from the EU into Britain is involved in food manufacture.”

Some pro-Brexiters may see the Brexit consequence of a loss of foreign workers as a good thing but unfortunately, it’s often the case that UK workers do not want to do the lesser skilled, lower paid jobs that migrants do. This, in turn, is likely to leave companies understaffed and overpaying.

If the UK decides to introduce differing rules this could be a headache and a kick in the ‘cash tree’ for many companies who want to sell their product in both UK and EU markets.

Indeed, some companies from overseas markets may bypass exporting their product to the UK altogether and concentrate on exporting to the EU and its 27 members instead.

Changes in legislation may not necessarily be a bad thing . The UK fishing industry may be about to receive a boost, with the news that no foreign vessels will be able to fish in the UK’s waters without the UK’s permission.

This could mean more business being created for UK fisheries, bringing money back into the UK and its seaside areas.

This backs up the view of companies such as Panasonic, Muji and Essex based The Grown Up Chocolate Company.

James Ecclestone, Founder, The Grown Up Chocolate Company, told Readyforbrexit.co.uk that “I’ve had a serious look at relocating to Slovakia, then we could invoice and manufacture in euros and Slovakian wage rates and rentals are much cheaper too.

“Our investment in the next stage is worth £2 million. That’s a big commitment for a company my size to invest £2 million (in the UK) when you don’t know where you’re going to be in five years’ time.”

A mass exodus of companies from the UK or companies stalling over expansions in the UK will have a negative impact on employment and the UK economy.

On the flip side of this though this may be a void that UK businesses may look to fill.

So, one of the Brexit consequences could be an opportunity for British food manufacturers to sell more of their British products to people living in Britain, which can only be good news for the British economy and indeed for those worried about ‘food miles’.

What seems an inevitable Brexit consequence (and to a certain degree is already happening) is that the cost of food and beverages will rise post-Brexit.  In short, this is due to all the issues raised above: uncertainty, the falling cost of the pound, loss of EU workers, costs of shipping to new markets and relocation of businesses.

As well as this, the cost of ingredients sourced from the EU could rise, especially if they are subjected to tariff rises.  Recent research by The Guardian revealed that if there was a hike “Beef imports would be on average 62% more expensive across all cuts, sheep meat up 57%, and pork and poultry up 32% and 31% respectively in a WTO scenario” and we would be reliant on imports as we only produce half of what we eat.

This was backed up by the Food and Drink Federation’s (FDF) Q3 2018 business confidence survey, which revealed that 38% of food and drink manufacturers are reporting an increase in costs already, due to stockpiling in case of a ‘no deal’ Brexit.

It also discovered that “Over 79% of business FDF spoke to reported increased ingredient prices’ due to the falling value of the £.”

However, there is some hope. Theresa May stressed in her white-paper, ‘The future relationship between the UK and the EU,’ the need to still ‘maintain a common rulebook for goods, including agri-food, covering only those rules necessary to provide for frictionless trade at the border.’

According to sources, the UK  imports 79% of their food and drink but also export 63% too (such as whiskey and chocolate) so this would be good news for both the UK and the EU.

What has become apparent in writing this blog is that everything to do with Brexit is uncertain. The Brexit consequences really are not guaranteed. All can seem ‘doom and gloom’ but we won’t know until the final decision in March. There are steps that you can take now though to prepare and there are solutions out there designed to help you.

In these times, where every penny matters, every margin is being squeezed and any changes need addressing as soon as they happen, a business intelligence tool like sales-i is especially helpful.

sales-i is software that works on both your desktop and on mobile that links with your financial data to alert you to customers who are spending less than usual or who have stopped buying altogether.

You can determine, too, if a certain product e.g. a particular beer is performing better in these uncertain times, allowing you to set a promotion to push this product even further.

It does all this in real time too, allowing wholesalers, distributors, and suppliers to respond immediately to any changes in demand or sales.  That seems essential in these changing times.