How partnership re-launch with Vintner Systems is helping drinks industry to sell smarter.

This weekend saw the 3rd round of this year’s British Touring Car Championships at Thruxton. As the sun beat down on the Hampshire circuit, Power Maxed Racing’s Senna Proctor and Josh Cook were thrashing out some blistering lap times in the free practice sessions.

Following great performances by the team at Brands Hatch and Donington Park, qualifying saw Senna clinch an incredible P5 start for race one with Josh following behind in P15. Race one didn’t disappoint. While early contact between championship leader Ingram and PMR’s Cook forced Ingram to retire, Josh was champing at the bit to climb his way up the group. On his home turf, Cook fought his way through the pack to finish race one in P9 and Proctor scored an incredible P7 finish.

Enter race two. The UK’s fastest circuit was no match for Cook as he blasted his way through the pack to score his second win in as many meetings. Proctor wasn’t far behind, finishing in a respectable P6. Making it three wins out of three weekends for the team. 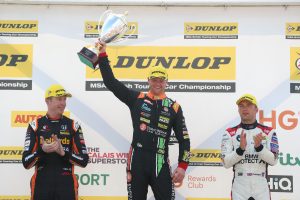 The third and final race of the day saw championship leader Adam Morgan of Mac Tools with Ciceley Motorsport storm to victory ahead of Proctor in P3 and Cook in P6.

Another successful weekend in the beautiful British sunshine has strengthened Power Maxed Racing’s position in the Team’s Standings and they are sitting pretty at the top with an impressive 26-point lead.

After just 3 weekends, Cook is just one point behind Adam Morgan in the Drivers’ Standings and the battle for championship glory is heating up! We can’t wait for the next race at Cheshire’s Oulton Park in early June – bring it on!